The public has reached a strong verdict on the billions of dollars of subsidies ­that our government hands annually to fossil fuel corporations making historic profits: end them. According to one recent poll, seventy percent of the public opposes giveaways to oil, coal and gas companies, support that largely holds up across the political spectrum.

It’s no wonder. In fiscal year 2011, oil and gas giant Exxon Mobil made $41 billion in profits, meaning that in the fifteen minutes it might take you to read a regular blog post like this one, the company reeled in more than a million dollars in profits. At every level, financing these kinds of corporations with taxpayer money makes no sense.

Congress has so far resisted taking substantive action to reverse this absurd situation. The astronomic sums doled out by the fossil fuel industry in the form of annual campaign contributions might explain much of the inaction and gridlock on Capitol Hill. But a broad coalition of grassroots organizations, public interest groups and environmentalists has now emerged, standing up to say enough is enough. 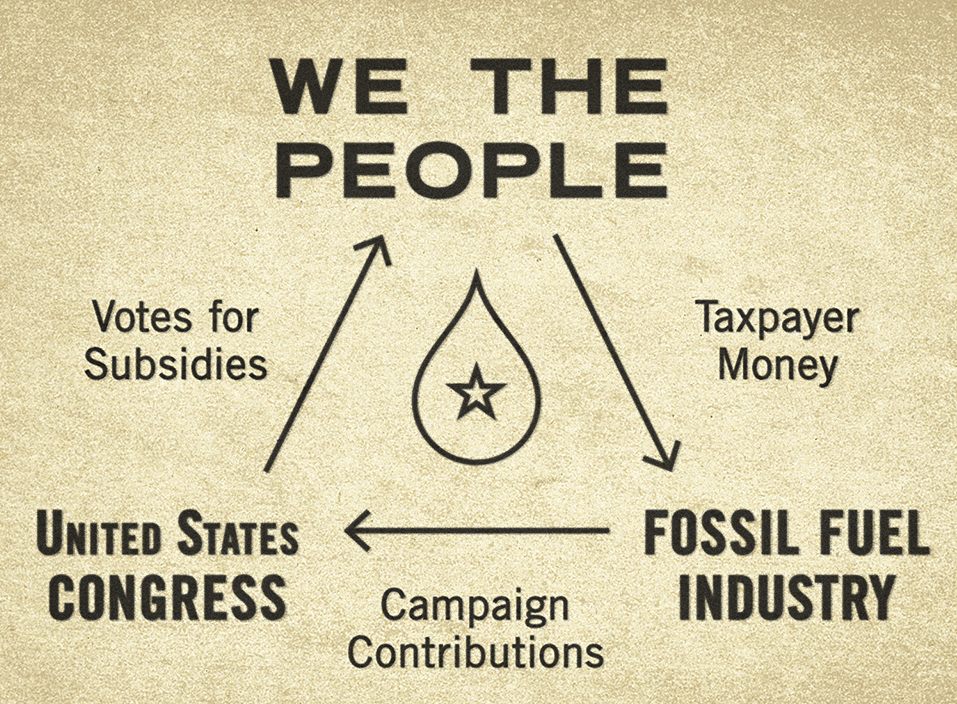 Senator Bernie Sanders (I-Vt.) and Congressman Keith Ellison (D-Minn.) lit a fire under our efforts when they introduced the End Polluter Welfare Act two weeks ago. This bill is the boldest, most comprehensive proposal ever introduced to end fossil fuel subsidies, eliminating more than $113 billion in direct subsidies, loopholes, and tax breaks over ten years.

Since we joined Senator Sanders and Congressman Ellison outside the U.S. Capitol on May 10 for the bill’s introduction rally, Friends of the Earth has worked with groups including 350.org, Oil Change, Climate Solutions, Public Citizen, Labor Network for Sustainability, The Nation, Natural Resource Defense Council, the Center for Biological Diversity, and Environmental Action to build grassroots support behind it. People are clearly fired up. In only ten days, we gathered more than 100,000 signatures from people backing the End Polluter Welfare Act — 17,291 of them Friends of the Earth activists. Showing members of Congress the breadth and depth of grassroots support for ending fossil fuel industry subsidies — and getting more of them to get behind this progressive bill — is our goal. Echoing the sentiments of the overwhelming public consensus for ending these subsidies, Senator Sanders recently wrote in the Huffington Post:

It is immoral that some in Congress advocate savage cuts in Medicare, Medicaid, and Social Security while those same people vote to preserve billions in tax breaks for Exxon Mobil which is the most profitable corporation in America. It is equally obscene that as those members of Congress fight to continue never-ending fossil fuel subsidies worth tens of billions, they are working overtime to deny a one year extension for key sustainable energy incentives for the emerging wind and solar industries. Instead of passing strong legislation to help reverse global warming, Congress continues the giveaways to the 200-year-old fossil fuel industry even as that industry’s carbon pollution wreaks devastation on our planet. Enough is enough.

Surmounting climate change is humankind’s greatest collective challenge at this point. In Bill McKibben’s words, helping out the immense corporations that profit precisely off of this impending disaster is “like giving a fellowship to a graduate student who wants to pursue a thesis on ‘Strategies for Stimulating Doughnut Consumption Among Diabetics.’” We know that taking on lobbies as powerful as the oil, coal and gas industries will be an uphill battle. But more than 100,000 — and counting — have made it clear that business as usual is not an option. The fossil fuel industry will likely push back with corporate contributions and misinformation campaigns, but we must push back harder. Our taxes and our Congress should serve the public, not fantastically wealthy corporations fueling the pollution of our air, water, and climate.