Powerful reminders to protect our planet on the anniversary of Kalamazoo

Powerful reminders to protect our planet on the anniversary of Kalamazoo

Coming off of the freakish extreme weather across the country the past several months, people are anxious for a break from the punishing weather and looking forward to a calmer July. Climate scientists, meanwhile, haven’t provided much solace on this front, amplifying warnings that the recent spate of brutal weather foreshadows the local effects of global climate change. The National Oceanic and Atmospheric Administration strengthened this argument recently by noting that the odds of the ongoing record heat wave occurring randomly may be as small as 1 in 1,594,323. Here’s another important statistic, though, also intimately related to our changing climate: 1,148,229. That’s how many gallons of oil the EPA estimates it has recovered from the Kalamazoo River in Michigan after an Enbridge tar sands oil pipeline ruptured in July 2010. The spill nearly reached the Great Lakes and was the largest and most expensive onshore oil spill in US history. Curiously, Enbridge ­maintains that the pipeline only ever leaked 877,000 gallons, so how the EPA managed to recover an unspilled 271,299 gallons remains a mystery. Nevertheless, July 25 will mark the two-year anniversary of the Kalamazoo tar sands oil spill. While all but one section of the Kalamazoo river has been re-opened to the public, clean-up and remediation along the impacted river will continue, even in the opened areas. Property values and the local community have been decimated, while residents near the epicenter of the disaster in Marshall, Michigan, are still sick from the spill’s toxins, experiencing seizures, unexplained rashes, headaches and memory loss.

A recent three-part exposé on InsideClimate News catalogued the numerous, systemic problems that plagued the ruptured Enbridge pipeline and the ensuing cleanup. Foremost among the issues is that the six-and-a-half foot tear in the ruptured pipeline 6B was leaking not regular crude but tar sands oil, an abrasive, tarry resin with “the consistency of peanut butter” when extracted from sandy soil. Also known as bitumen, this sticky crude is thinned with liquid chemicals — including benzene, a known carcinogen — so it can be pumped through pipelines, at which point it’s referred to as “dilbit,” or diluted bitumen. Tar sands oil pipelines have an appalling safety record, with a spill rate three times the national average for conventional oil in parts of the US. Friends of the Earth’s Canadian allies Environmental Defense Canada and Equiterre have explained how this occurs: “Getting raw tarsands oil through pipelines is like moving hot, liquid sandpaper that grinds and burns its way through a pipe, thus increasing the chance that weakened pipelines will rupture.”

But a drastically increased likelihood of spills is only where the problems begin. Originally estimated at $5 million, cleanup costs for the Kalamazoo disaster have well surpassed a record-breaking $800 million, 10 times as much per liter as the cleanup costs for conventional crude oil, owing to the challenges of recovering heavy tar sands oil. Unlike regular crude oil, which floats on water after a spill, tar sands oil from the Enbridge pipeline sank to the riverbed while benzene and other additive chemicals evaporated, simultaneously polluting both air and water.

Mark Durno, a deputy incident commander for the EPA still working at the cleanup site in Marshall, told InsideClimate News, “We had no idea sinking oil would be such a problem. Not only was this material submerged but it was mobile and moving along the river bottom,” referring to tar balls the size of marbles — many left as impossible to recover — that were bouncing downstream and burrowing deep into river sediment.

Presenting its scathing report on the Enbridge spill this week, National Transportation Safety Board chairperson Deborah Hersman said that Enbridge and the regulatory agency in charge of oversight handled the spill as haplessly as “the Keystone Cops.”  The NTSB is an independent federal investigative agency responsible for civil transportation accident investigation. Among other shocking findings, the NTSB report noted that Enbridge knew about the pipeline’s vulnerabilities as early as 2005 but repeatedly chose not to act. “This accident is a wake-up call to the industry, the regulator, and the public,” said Hersman in a public statement, adding that “for the regulator to delegate too much authority to the regulated to assess their own system risks and correct them is tantamount to the fox guarding the hen house.” 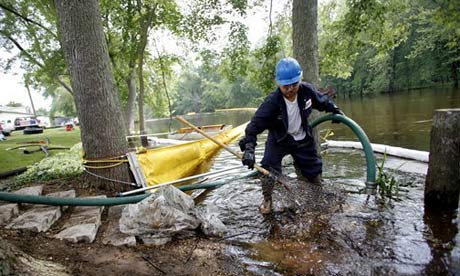 ­Responsible for regulating interstate pipelines in the US is the Pipeline and Hazardous Materials Safety Administration, an underfunded federal agency in the Department of Transportation that relies mainly on self-reporting to manage pipeline issues. Because of this practice, federal and local officials didn’t even discover until more than a week after the spill that pipeline 6B was carrying tar sands oil and not conventional crude. Federal regulations don’t require disclosure, and Enbridge was predictably reluctant to divulge this important information, to the immense detriment of the local land, water, and communities in the spill’s path.

Enbridge’s own internal safety response to the leak was so flawed that the company didn’t act on the ruptured pipeline for hours despite multiple warnings and complaints from the public of a smell like “boiling hot asphalt” and sightings of a brown mist rising over “river water the shade of a dark chocolate malt.” Instead, Enbridge twice pumped more oil into pipeline 6B over the course of 17 hours, contrary to the claims of its emergency response plan filed with the PHMSA: that a rupture would be detected in a mere five minutes and the damaged segment closed in three minutes after that. NTSB board member Robert Sumwalt said of Enbridge’s reaction: “It’s evident that this accident did not just occur because of corrosion in the pipeline. What this investigation has shown is this accident was the result of corrosion throughout many vital safety aspects of the Enbridge organization.” The consistent ineptitude of Enbridge’s safety procedures throughout the debacle is stunning — as unearthed by InsideClimate News, just ten days before the disaster at Kalamazoo the company applied to the PHMSA for a two and a half year extension to decide whether or not to repair pipeline 6B.

Earlier this month, the PHMSA proposed a $3.7 million civil penalty for Enbridge’s mishandling of the Kalamazoo spill, the largest fine in the agency’s history. But even here the regulatory response to Enbridge is laughably feeble. The federal fine is less than half of a percent of the total cost of the spill — not counting irreversible damage done to the environment and public health. Based on the EPA estimate of how much tar sands oil was recovered from site of the spill, this also means the federal agency fined Enbridge just $3.22 per gallon of crude oil spilled, compared to the $3.41 per gallon of gas the average American pays at the pump. Reflecting on the mess Enbridge has left behind in Kalamazoo, British Columbia Premier Christy Clark harshly censured the company’s plans to expand into her province with its proposed Northern Gateway tar sands pipeline, telling reporters:

I think the company should be deeply embarrassed about what unfolded, we saw that in the [NTSB] report. If they think they’re going to operate like that in British Columbia – forget it… Enbridge has some pretty important questions to answer, because the results of that report are absolutely unacceptable.

More than simply an indictment of one company’s exceptional recklessness and pathological endangerment of the environment and public health, the Enbridge tar sands oil spill serves as a powerful cautionary tale. We won’t see real integrity from dirty energy companies until, as Hersman put it, they “commit to safety with the same vigor that they pursue profits.” Moreover, the cozy relationship between regulators and profit-driven dirty energy companies totally shatters the government’s mandate to protect the environment and the public. Regulators should be held first and foremost to the interests of people and the planet, not polluters.

And there’s a broader question to ask: what is the need for expanded tar sands oil production when its history is one of recurring disasters, inadequate regulation and a lack of public accountability?

Claiming that it needs to satisfy growing demand for cheap dilbit, Enbridge is now gearing up to double the capacity of the disastrous Kalamazoo pipeline, to pursue a series of pipeline expansions in the Midwest and to break ground on a brand new project in New England. Named Trailbreaker, this new pipeline would cut through 750 miles of eastern Canada, Vermont and New Hampshire, terminating in Portland, Maine’s Casco Bay. Along the route are New England’s most important waters, including Sebago Lake, the major drinking water resource for Maine’s largest metropolitan area and home to a native species of landlocked Atlantic salmon. Its terminating point at Casco Bay, a large, rich estuary near Portland, threatens invaluable coastal natural resources and a vibrant marine economy. A spill along Trailbreaker’s corridor, meanwhile — including the Grand River Basin, Lake Ontario, the Saint Lawrence River, Victory State Forest, and Androscoggin River — would endanger many delicate marine ecosystems and the millions of Canadians and Americans that depend on them.

Destroyed ecosystems and displaced communities like those along the Kalamazoo River and a rapidly changing climate are just two painful reminders of oil companies’ willingness to stoop to any length to pad their profits. It’s our duty to learn from the past and refuse to let more communities and ecosystems become casualties of the dirtiest forms of energy, in the process protecting our shared climate from spiraling out of control.