In our campaign to halt the expansion of palm oil plantations, Friends of the Earth U.S. works closely with our partners at Walhi/Friends of the Earth Indonesia, and we are excited to announce that Walhi has achieved a major step toward one of the core goals of their palm oil campaign: Indonesia’s new president, Joko Widodo has ordered the Ministry of Environment and Forestry to review licenses for companies that have converted peatlands to oil palm plantations.

Last week, the president, known by his popular nickname Jokowi, visited the haze-ridden province of Riau to get a close-up look at the problem of rain forests and peatlands burned for conversion to palm plantations.

“We Riau people often welcome our guests by saying ‘welcome to the jerebu [haze] country,’” a Riau University peat researcher told the Jakarta Globe, referring to the severe smoke from area’s nearly constant forest and brush fires. “People in Riau don’t want to have to greet visitors like that,” he said. “But the fact is, that’s the ultimate truth of our life here.”

During a visit to Sungai Tohor village in a district of Riau often hit hard by forest fires and haze, President Jokowi said people’s farming had a minimal impact to the environment, when compared to corporate monoculture plantations.

“The best thing to do is to give the land to people,” the president is quoted as saying in a second Jakarta Globe article. “What’s made by people is usually environmentally friendly. They won’t do any harm to nature. However, if we give the land to corporations, they will only switch it to monoculture plantations.”

As a step toward stemming the problem, President Jokowi ordered Indonesia’s Environment and Forestry Minister Siti Nurbaya to review concessions for plantation companies in Riau and elsewhere in Indonesia.

“I have told the minister of environment and forestry to review the licenses of the companies that have converted peatlands into monoculture plantations if they are found damaging the ecosystem,” Jokowi was quoted as saying. “There is no new solution to the issue, as everyone understands what must be done. This is a matter of whether we are willing to resolve the issue.”

Mongabay.com notes that Jokowi’s move came shortly after his government announced a four- to six-month moratorium on all new logging concessions. That prohibition goes beyond the 2011 nationwide moratorium on new concessions across more than 14 million hectares of forests and peatlands. 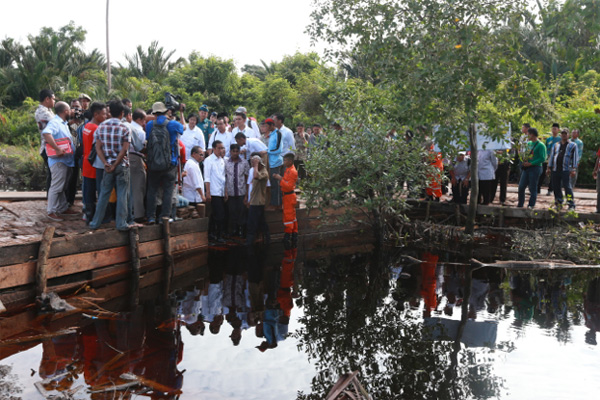 Environmentalists, including Walhi/Friends of the Earth Indonesia, have great hopes for Jokowi, who graduated from Gadjah Mada University’s School of Forestry and has sought advice from Walhi on how to approach the palm oil problem. The president has pledged to clean up Indonesia’s notoriously corrupt forestry sector as a step toward reducing deforestation. But Jokowi faces strong opposition from entrenched interests in the logging and plantation industries and a difficult political landscape, making his mission a daunting challenge.

Walhi hailed Jokowi’s Riau visit as proof of the president’s commitment to solving ecological problems — but they recognize that this is merely a first step. Walhi Executive Director Abetnego Tarigan, told the Jakarta Globe that the president must soon follow up the visit with “concrete actions” in the form of firm law enforcement.

“Among concrete actions that President Jokowi can immediately do is ordering the termination or review of concessions for companies proven to have been involved in forest and land fires,” Abetnego said.

“Law enforcement must continue legal action against companies that have been named suspects, as well as develop investigations into companies that civilians have filed reports against,” he added.

Walhi national forest campaigner Zenzi Suhadi told reporters that one of the main causes of fires is lax government monitoring and law enforcement, which corporations with forest concessions have come to take for granted.

“Why are these fire happening?” Suhadi asked. “Because government and law enforcement have intentionally turned a blind eye to those who benefit from them. If the police were serious in handling this, fires wouldn’t have been happened in the first place. Regulatory reviews review and license evaluations should be government priorities.”

“The law may be deceived, but the environment doesn’t lie,” he said. 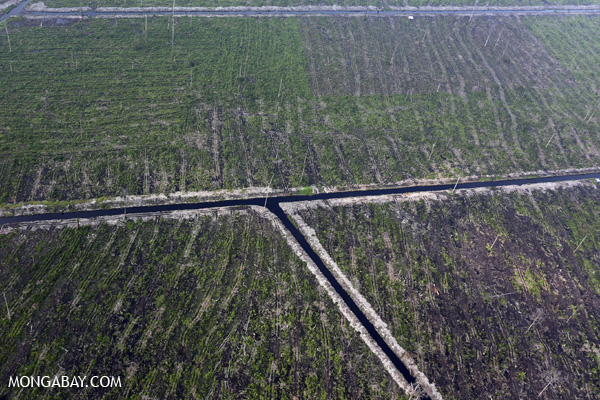 Clearance of peatland in Riau for an industrial plantation. Canals are dug to drain the area before the trees are cleared. Drained peatlands are highly flammable. Photo credit: Rhett A. Butler, Mongabay.com